Last night during dinner with our friends in Boston we were rudely interrupted by the blast of a mighty loud and deeply prof undo sound. Susan yelled out “its the Queen Mary 2, I forgot she was in town, quick grab some binoculars and we can try to see her from our rooftop deck.

We quickly grab a couple pairs of binoculars and in the darkness of evening I could see the top of the superstructure and the word “Mary”. I yelled out my discovery only to hear Susan yell back “she is leaving port, let’s get to a car and drive to Castle Island and see it leave”.

You see our friend Susan has a real yen for watching big cruise ships, ocean lines and the like come in and out of the port of Boston (probably any port would be more likely). So we hustled our dinner dishes into the kitchen and bounded down the stairs to my car. Susan directed me to the port which was only five minutes from their home. We were in a cavalcade of cards heading the same direction. Out loud I wondered if everyone in Boston was doing the same thing we were.

Eventually all the cars pealed away and we were left to scurry to the closest parking spot in the park. Susan jumped out of the car and started to dash up the hill. I heard he yell out that we had no time to waste so hurry, hurry”! Castle Island has a large walled building (castle–duh?) and we had to run around it. Just as we reached the far side of the wall this huge floating city gracing slid by. There blazing on the side of the top deck was “Queen Mary 2” so big and bright in the night that one could probably make it out miles away. What a sight she was too!

It took all of five minutes for her to pass by and move down the bay–whew! The excitement of the chase and the sight of the QM2 made the whole night come alive.

Then as we turned and started tramping down the hill a small shadow seemed to be moving ahead. I pulled out my i-phone and turned the flashlight toward the grassy knoll. Moving ever closer, Susan in a very droll tone said, “oh, its just a skunk”. “Huh, in the city?” I asked. She said they are everywhere. Just then a man and his son strolled by and he must have heard our banter because he sarcastically commented “you should see the rats up ahead working over the trash bins”.

Don’t you just love being in the city? 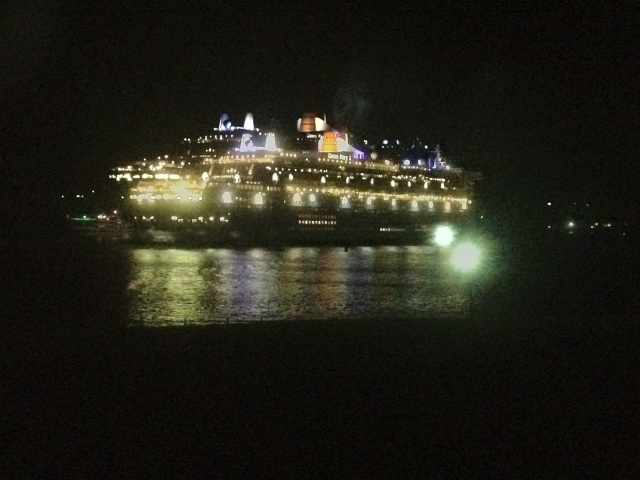