Time for a Winter Respite

Leaving sub-zero weather behind was definitely not a chore. Enough of Ol’ Man Winter! Better climes beckon us — we now head south.

Surely driving through Iowa was only a preface to the real joy of seeing no more snow and halting the reeling caused by the brisk winds of the northern plains. Crossing the border initiated a slight change in the thermometer reading — from -3 to +10. Any snow present was lining the highway like sculpted sand dunes in a very cold desert. Imagine the thrill?

Soon the road signs announced the towns we had bypassed during past excursions. Mason City, Clear Lake, Forest City — wait a second we said in unison! There was something about Mason City, but what was it? Soon my selective memory kicked in and I blurted out the words — Frank Lloyd Wright. One of America’s most celebrated and eccentric architects Wright had designed a hotel in Mason City a century ago. Known now as the Historic Park Inn Hotel it is located near the Music Man Plaza — that is correct Mason City is also noted for being the setting for the “Music Man”– right here in River City! Yes, that is the actual nickname for this fine town. Meredith Wilson decided to base the Music Man on his real life experience as a Mason City favorite son.

But I digressed a bit so back to the hotel and it is a gem to behold. However, before discussing the hotel I must thank Iric Nathanson one of my long-time friends since it was he who first noted the Wright designed structure. The hotel is filled with beautiful furniture and artifacts designed by Wright or that were created as part of the Prairie School of Architecture. One sensed the history of the building as we wandered from floor to floor. Never saw a ghost; but one could feel the power of the history that grips the hallways and vestibule. The pictures that follow are the front desk and lobby, a lounge or sitting room, a meeting area and the front of the building. 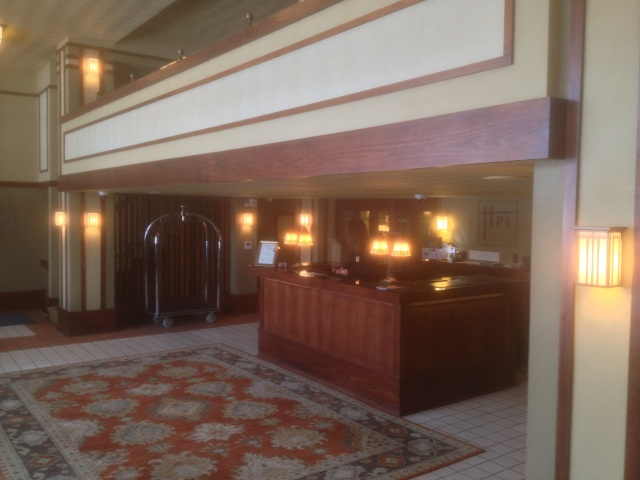 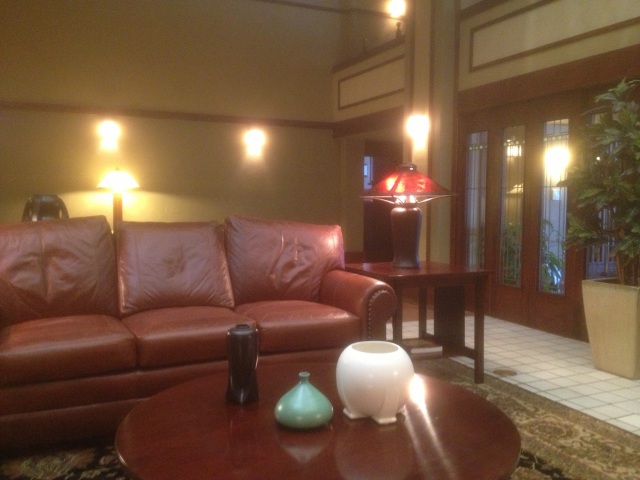 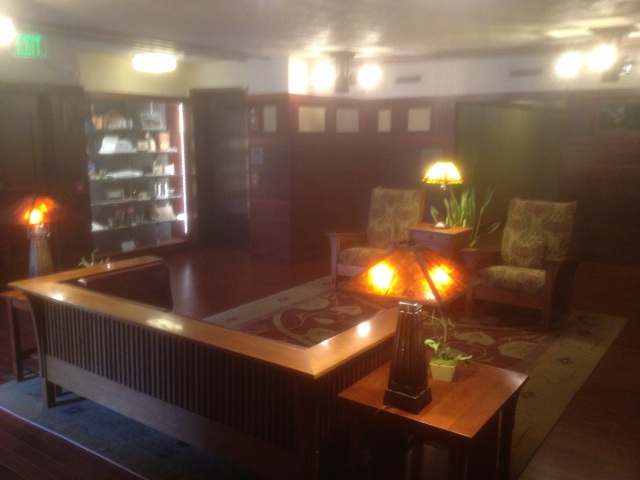 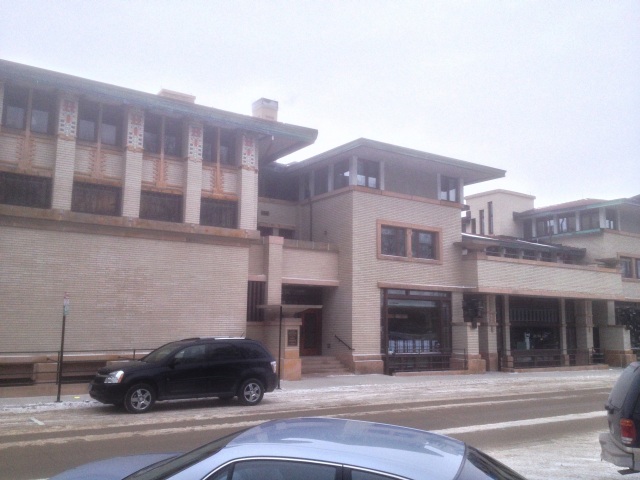 The hotel rests within a historic area in downtown Mason City. Just down the street are other architecturally important structures such as the bank, other office buildings and some retail space too.

The hotel was an juncture for important town meetings since it is located in the town’s financial district. Banks in particular liked using the meeting rooms in the hotel. Even though it is now a century later banks were still supporting sound money management: 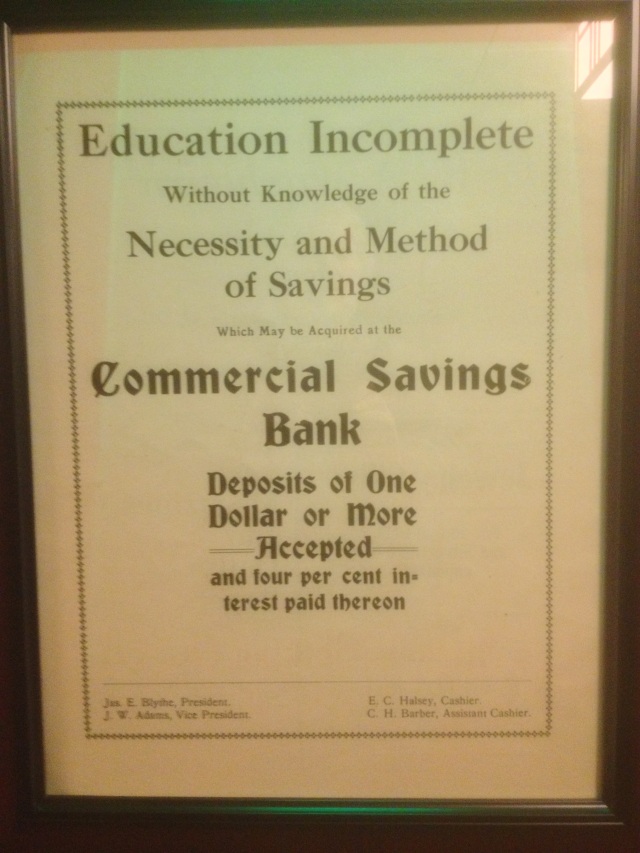 The road leading out of town took us past Clear Lake — famously noted for being the location of final concert performed by Buddy Holly, The Big Bopper and Richie Valens all were taken by a plane crash in a snow storm. One can only imagine the high level of attendance expected for this weekend’s festivities. This weekend was the 54th anniversary of this tragic accident aka “the day the music died”. The plan crashed on February 3rd during a heavy snow storm. In remembrance many rock and roll types began encamping near Clear Lake for the memorial concert that occurred later this weekend.

Upon exiting Mason City one saw signs announcing that John Wayne was born here (Marion) that the Field of Dreams is only a few hours away; as are the Bridges of Masdison. Maybe we will visit both historic sites during a future trip. Until the next time I will refrain but wondering what one can do or see in Iowa.

I'm retired. Travel a lot.
View all posts by tourdetom →
This entry was posted in Uncategorized and tagged escape, Travel, warm, winter. Bookmark the permalink.

10 Responses to Time for a Winter Respite