I must have clicked my heels because Calgary is not like the rest of Canada. No sir, it could be the doppelgänger for Texas. Pick-up trucks and SUV’s are the vehicle of choice for many. Lots of residents sport cowboy hats and boots. Ranches replace farms. Cattle and hay replace fields of grain. The energy industry is beyond huge here — Alberta is home to the Tar Flats (oil) and natural gas production. Oil derricks pop-up everywhere: natural gas tank farms, train cars carrying gas and oil and pipelines become regular sights. Wealth is evident — but not with arrogance; as is growth — several new skyscrapers housing banks and energy companies are being built downtown.

Calgary’s downtown is very walkable and inviting. The footprint is traditional and with loads of flora and fountains. I was struck by the number of folks shopping, noshing and/or drinking downtown on a Saturday. People were in the coffee shops, outdoor patio-bars and restaurants even the downtown core which is closed on a weekend. Calgary boasts a multi-block downtown mall that is geared to shopping and entertaining. It is pedestrian only — hear that Nicollet Mall lovers? No risk to life or limb. 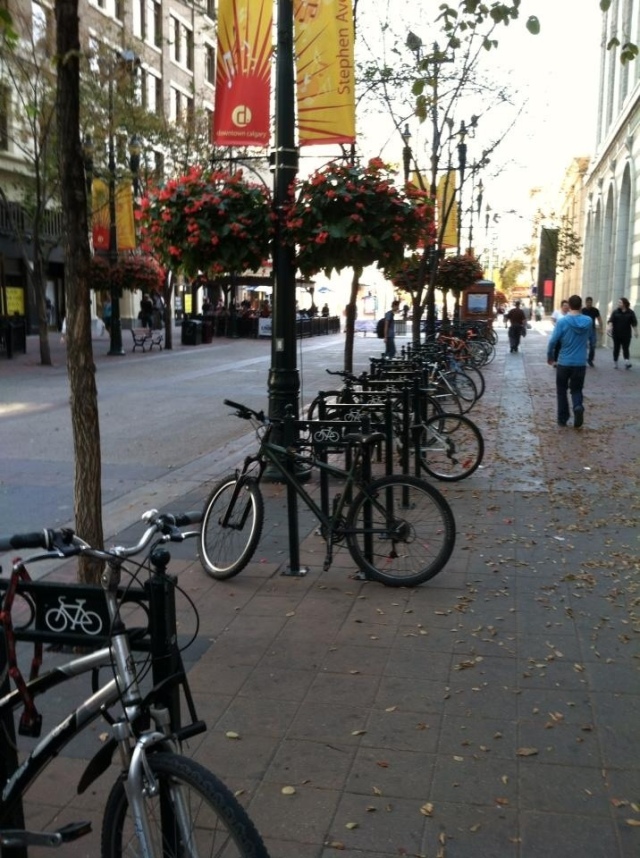 Light rail runs through downtown and then out to the suburbs. No fare is required while riding around downtown proper. The route travels near all the major downtown tourist destinations: the Calgary Tower (Space Needle wannabe), museums, opera house, music hall and football stadium. 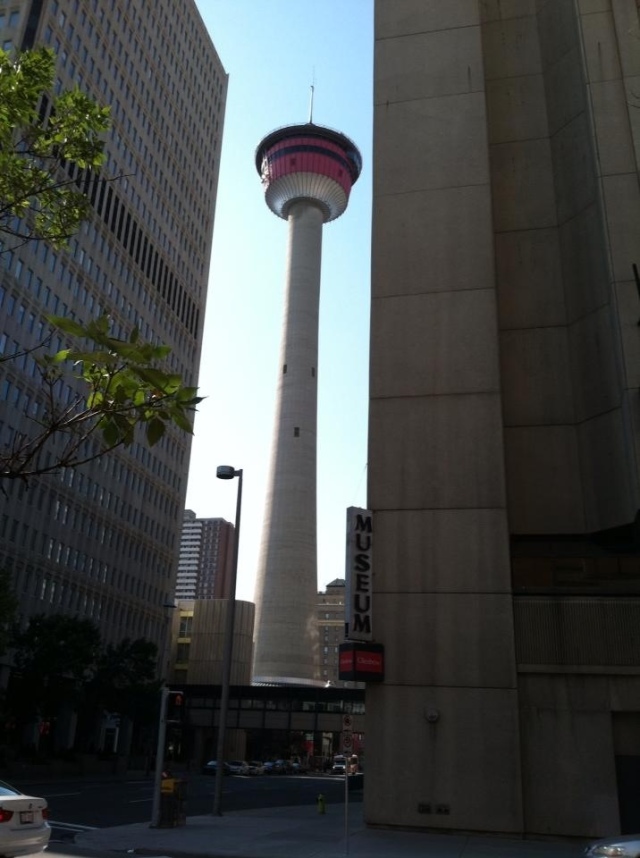 I was very impressed by the large number of outdoor sculptures sprinkled throughout the downtown area. The topics were quite varied and included themes about world/national peace, human rights and women’s rights.

The Women’s rights memorial was particularly inspiring. It focus on obtaining women’s suffrage; and the efforts to improve women’s educational and political opportunities. Emily Murphy led successful actions that overthrew a law from 1867 that uses the word “persons” to represent men and on rare occasions women. Through the efforts of these five women the rights women of got a boost throughout Canada: 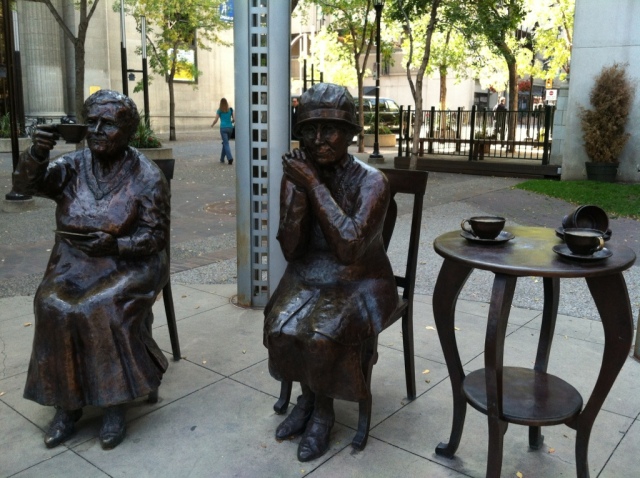 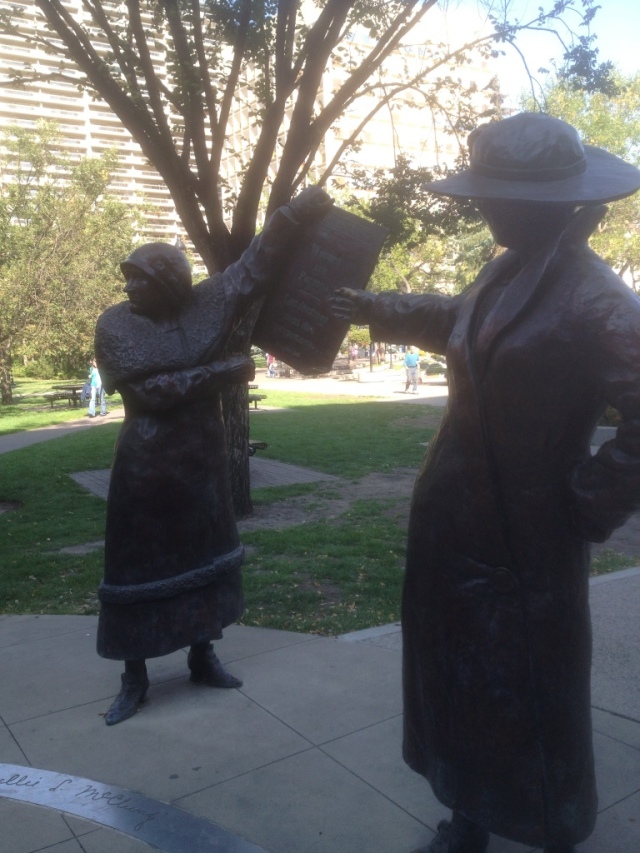 For some Calgary represents Olympic dreams — the 1988 Winter Olympics were hosted by the city. Much of the infrastructure created to support or honor the Olympics is still in use today: parks, sporting venues and light rail. 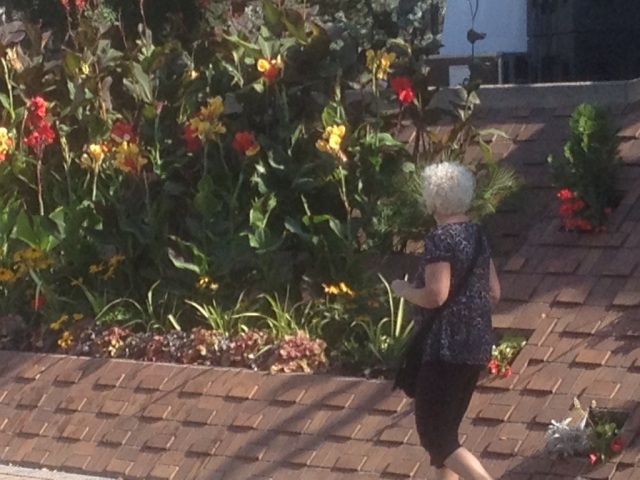 Being the largest city in western Canada and the third largest in Canada with more than one million residents Calgary has the financial heft to support a variety of museums, artistic institutions — opera and a symphony orchestra — and a world class zoo. We did visit the zoo while in Calgary. Unfortunately spring flooding caused significant damage to the sections housing Asian and African animals. Repairs were scheduled for completion by this fall. We missed the renowned ape exhibits; but we did see the penguins (brrrr…their house is kept at 35 degrees) and the dinosaur land exhibit –yeah! 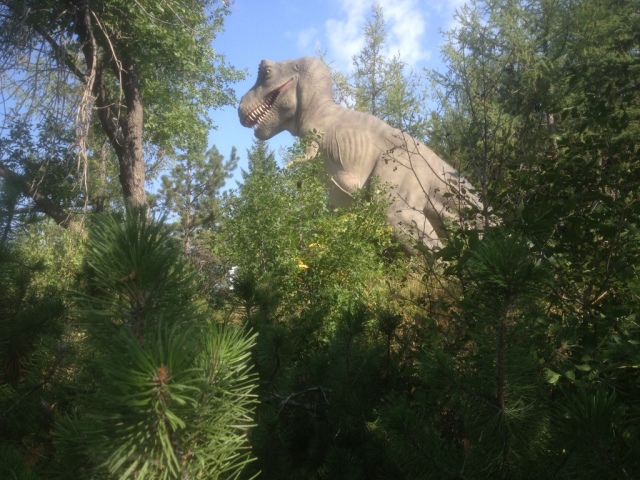 Its time to trade-in running shoes for hiking boots. Banff National Park, Yoho and the rest are beckoning me.

I'm retired. Travel a lot.
View all posts by tourdetom →
This entry was posted in Uncategorized and tagged Banff, Calgary, Canada, Travel. Bookmark the permalink.