Growing up dad was mad for golf.  This meant that I learned the game at an early age.  That was me marching across the converted corn fields toting around a bag of Sears junior clubs at 10.  As soon as weather permitted — ice could still be floating in the ponds, lakes and streams near or on the courses — we’d be out hitting balls.

I became so fixated on the sport spending many Sunday afternoons watching PGA telecasts.  I thought there was no better way to learn the game than to watch the pros at work.  My swing mimicked Arnie–or so I thought as the time.  As a putting mentor no one was better than Billy Casper.  Sure I liked watching the Golden Bear, but Lee Trevino was always more entertaining.

Later I played golf in high school.  I was so obsessed with it that I organized an annual spring school tourney that pitted teachers and students against the spring elements — lots of cold rain as the event fell on Memorial Day weekend.

These days playing golf is not a priority.  Not that I wouldn’t enjoy getting out on occasion.  Its just too darn hard to find the time and to find partners to play.  Admittingly, whenever I walk downstairs my clubs are often the first thing to catch my eye.  Their sweet siren song grabs my attention.  The love affair seeks re-kindling.  Nope, too busy I think.  Then usually I sigh then quickly look away and move on to the task at hand.

For a hour or so today I got the opportunity to re-live my past.  The occasion was lunch at the Colonial Country Club in Fort Worth, TX.  To those familiar with the PGA this course has sponsored the Colonial Open for 75 years or so.  The event is held around Labor Day.  Walking into the clubhouse I was led past the “Ben Hogan” room — a treasure room. 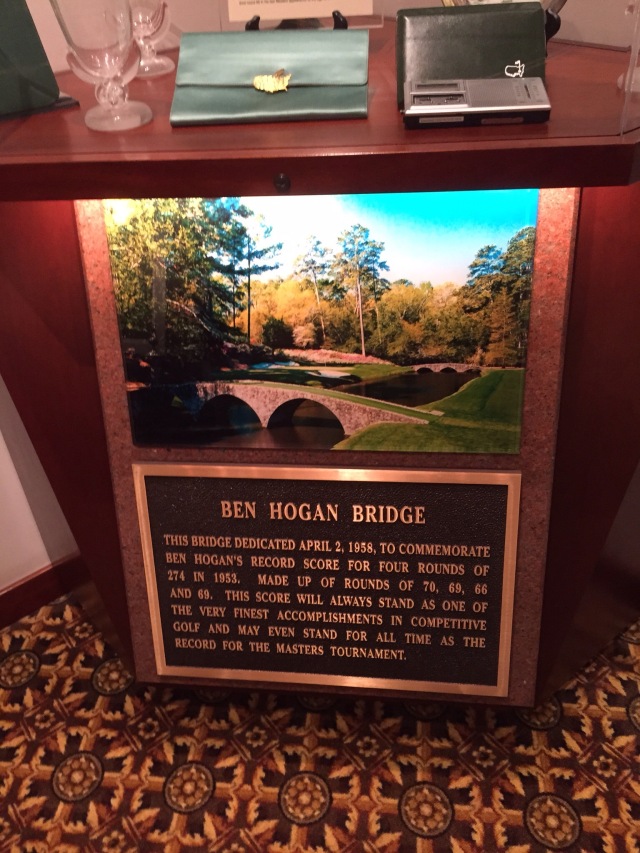 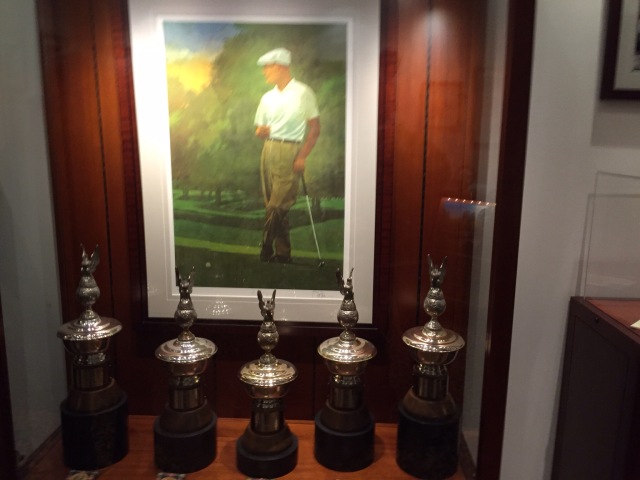 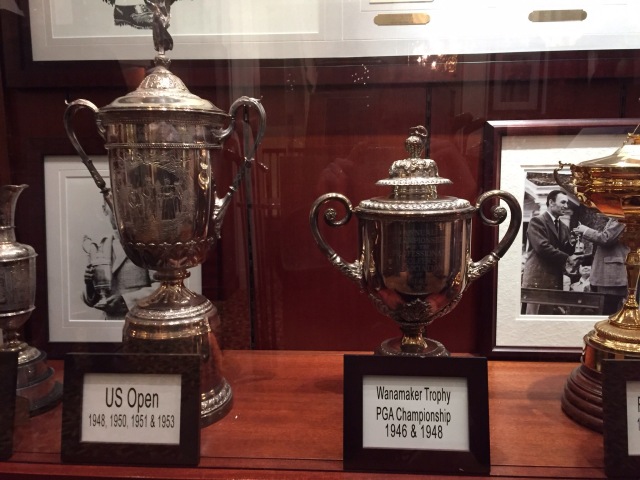 The rarified air gave me vapors — I was a twelve year old again.  Hogan was a champion’s champion.  His swing, which I never could copy, was smooth as butter.  Hogan is considered to be one of the greatest players in the history of the game. Here were his trophies, golf clubs, photos — you name it.  I cannot say I was speechless since that rarely happens to me.  But I was excited.  Looking at his clubhouse locker I had the urge to run outside and walk the course. 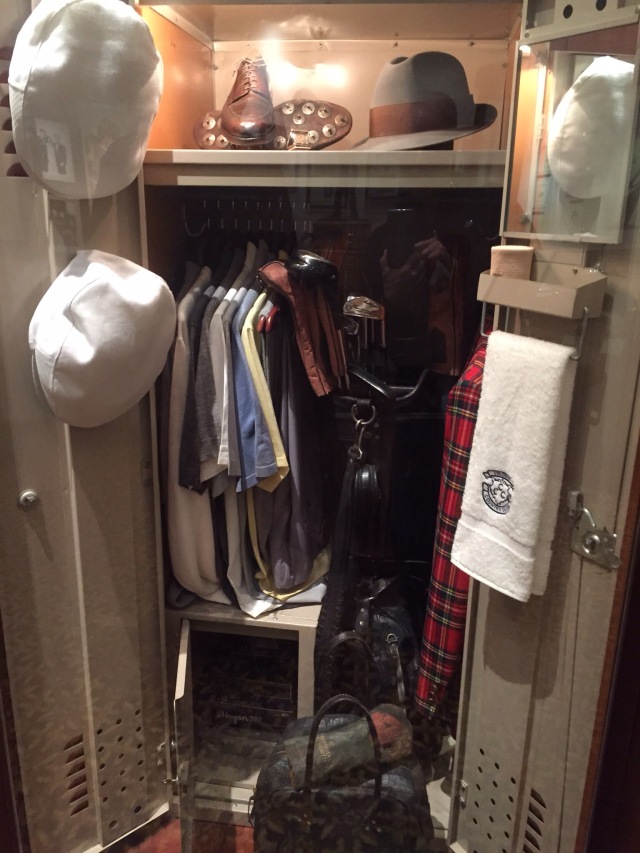 Later after lunch we walked outside moving to a point that provided the best view of the course. “Sweet”, I whispered to myself.  Visualizing Hogan playing “target” golf amoungst the trees, sandtraps and water hazards.  Ahead stood a large blue structure seemingly taken from a large erector set.  I knew what it was — “This must be the 18th hole, cuz that looks like the leader board.”  My friend smiled broadly and nodded yes.  My tour finished near the clubhouse. Near the entrance in long black trays lay long blue tees and white greens markers addressed “Colonial Country Club” — I purloined a sample stuffing the treasure in my pants pocket.

We turned to walk back to the car.  Looking up the sky was filled with hazy sunlight portending the snowfall expected for later tonight.  The previous day’s ice was melting off the sidewalk and drive.  I took a short breath and exhaled lightly.  I could see my breath.  “Wait a sec.  I want to take one more picture.”  I pulled out my phone and briskly trotted back toward the course.  I clicked the camera, turned to catch up with my friend.  “Thanks, that really made my day”, I said.  I knew I’d remember this day forever.

Yu, his swing was as smooth as butter. 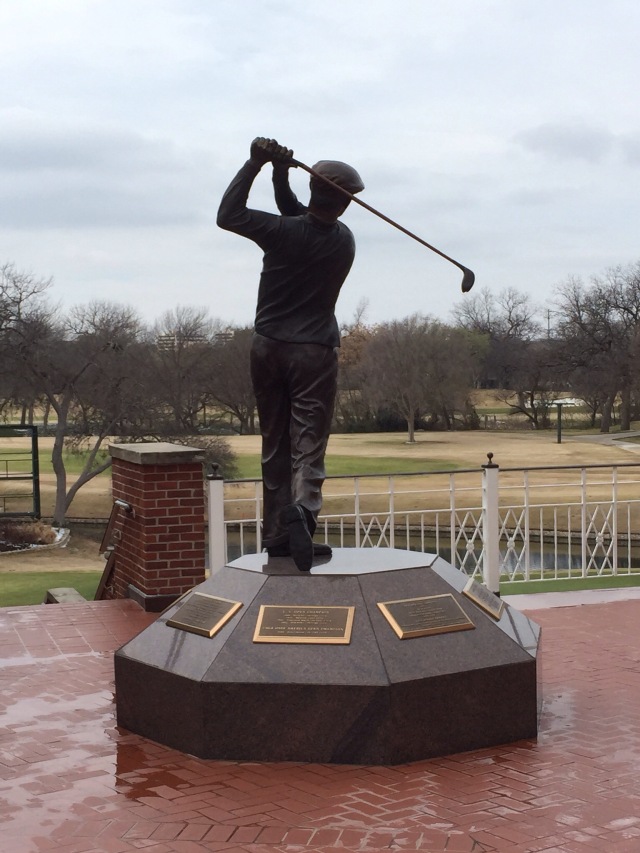