Before the Civil War the city of Galena, IL numbered over 10,000 residents.  Located on the Galena River, a stone’s throw from the Missisisippi River, it thrived as a steamboat hub.  It was the success of lead mining that really laid the foundation for the city’s posterity.  During the Civil War — the Union relied on Galena’s mines to supply lead for amunition and cannon balls.  For a period of time Galena was the largest city in Illinois — bigger than Chicago.  The decline in lead minding eventually shrunk the city’s population to under 3,500. Today the city thrives on tourism.  At its heart is an historic district full of antique shops, restaurants, etc.  that celebrates the time of President and General U

Originally from Ohio, Grant brought his new Missouri bred bride to Galena to purchase a business which he promptly ran into the ground.  Grant was never successful in business — he was truly a military man.

Interestingly, Grant’s parent were abolutionists, whereas his bride’s parents were slave owners.  Needless to say there was little love lost between the two families, especially when Julia Grant’s parents presented the newlyweds with two slaves as wedding gifts.  (Grant freed the slaves shortly thereafter)

To the south on a tall hill overlooking Galena is the home of U.S. (Ulysses) Grant.  Grant was one of nine Civil War generals that came from Galena.  Abraham Lincoln chose Grant to lead the Union Army in 1863.  He prosecuted the war to its final end — a Union victory. 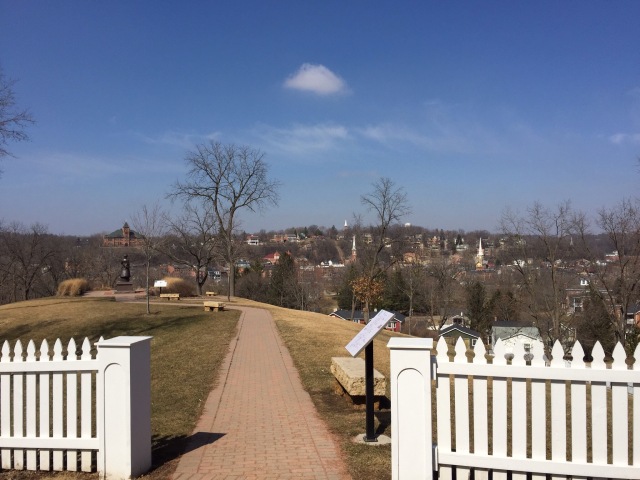 Galena’s business leaders gave this house to Grant in appreciation for his efforts during the Civil War at a cost of $2,300.00.

The interior of the house contains many of the President’s original furnishings.  Below is the drawing room — a tour guide is explaining how the Grant family enjoyed the home. 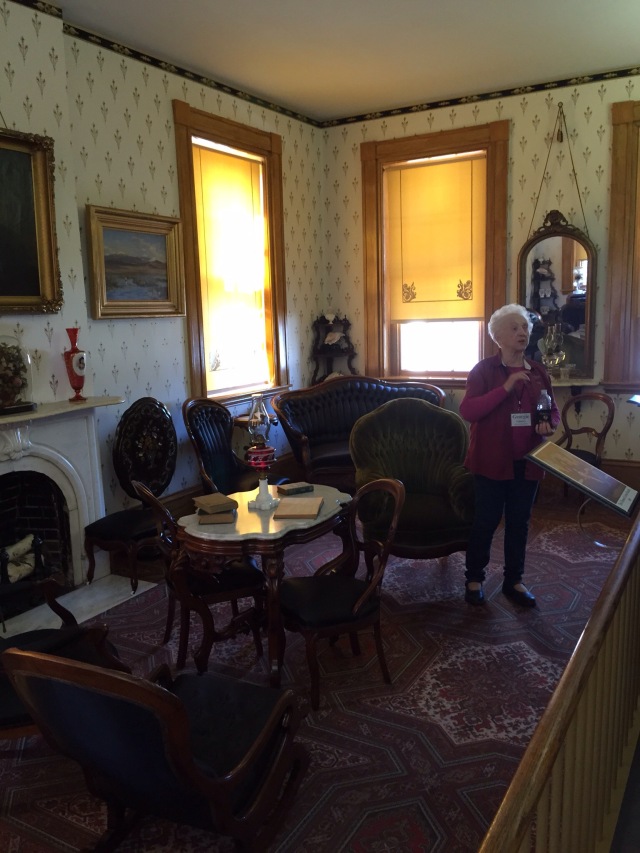 Grant detested all meat, fowl and fish except beef.  He was not a fan of veggies either.  He did enjoy prime rib as long as it was well-done.  The dining room was arranged as one would find it when the Grant family was at home.

The photo below shows the living room fireplace with a cannon ball as a curiousity.  It was obtained during the Civil War and has rested here for over 145 years.

﻿﻿This stove had two uses.  The first was food preparation.  The second was to heat bath water.  Around the front of the stove is a “bathroom” with a copper bathtub; no toilets — an outhouse and chamber pots were located in each bedroom.  This tub was a fairly atypical item in houses of the time.  The copper helped retained and maintained heat.  The entire family shared the water — father bathed first and so on down the line.  It was at this time that the phrase “don’t throw out the baby with the bath-water” was coined.

﻿﻿This is one of only a few original art works in the house: Lee’s surrender at Apomattax.

﻿﻿This was the bedroom of daughter “Nellie Grant”.  There were four bedrooms in the house: one for the parents, one each child and a guest room.

﻿﻿Mrs. Grant was a power unto herself.  She was the first presidential spouse to use the term “First Lady” as in First Lady of the land.  She was the first First Lady to have a press secretary.  She was a vociferous supporter of women’s sufferage — she was a friend of Susan B Anthony.  She spent considerable time updating the “shabby” furnishings of the White House.  She was one of only three First Ladies to be commemorated in a statue. 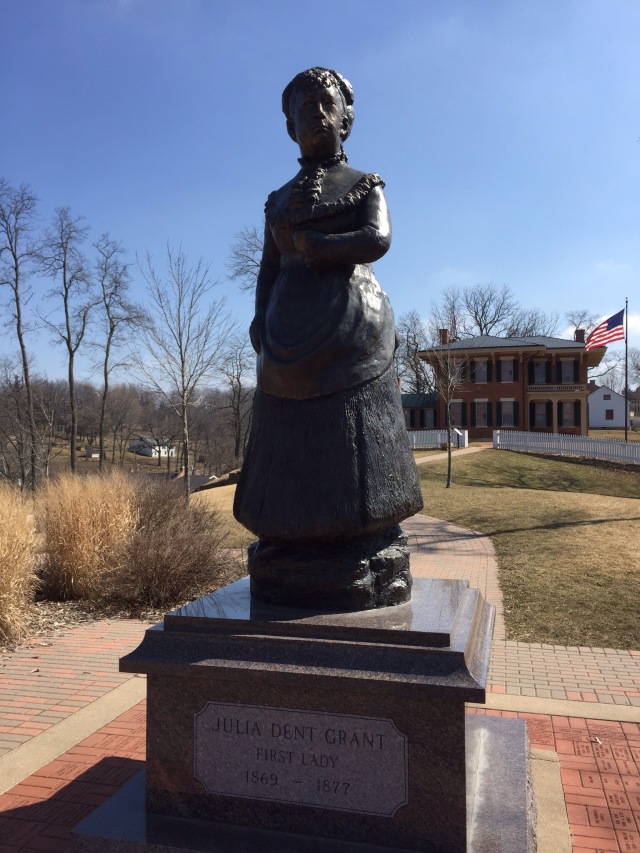 The President and this wife are not buried in Galena.  After completing his two terms as president Grant traveled the world and eventually settled in the east.  He completed his memoirs before succombing to throat cancer. The couple are interred in a tomb located in New York City. 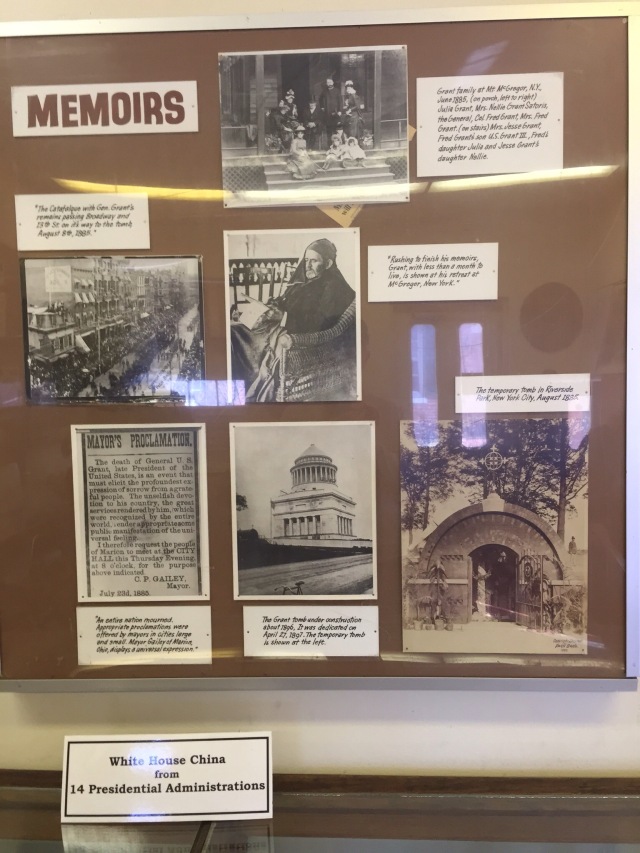 Galena is celebrating the 150th anniversary of the end of the Civil War this year.  If you have the opportunity go visit.   And if you do visit save room for breakfast or brunch at Otto’s Place.  Its located a few minutes down the hill from the Grant home.  The french toast was as tasty as any I’ve ever tried.  I had cinnamon swirl french toast with thick slices of bacon on the side.  My eating partner ordered banana french toast.  She thought she was getting toast topped with sliced bananas.  Surprise, it was two thick slices of wickedly tasty banana bread prepared as french toast. Delicious!  Oh, and be sure to ask for real maple syrup — trust me — it matters! 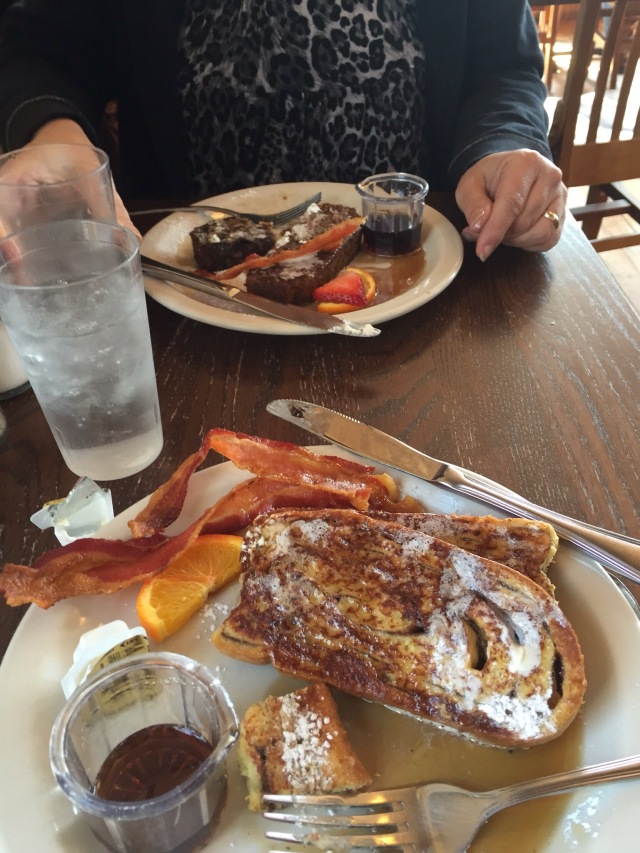 1 Response to Taken for Granted