Not a Child’s Game

When I was in school we spent very little time studying the Oregon Trail — I tucked my knowledge into the recesses of my mind. Later, I recall kids in elementary school playing “The Oregon Trail” when it was a card and board game. Of course, eventually it became a popular board and computer game.

So when we got to Baker City in northeastern Oregon I became a child again — because that’s where the National Historic Oregon Trail Interpretive Center can be found: 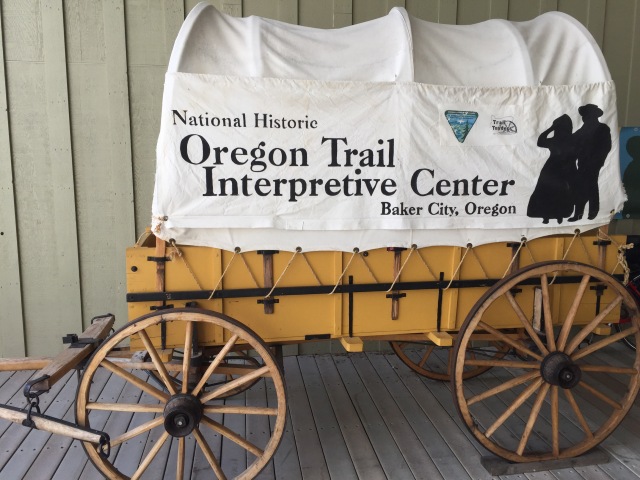 The center is on Flagstaff Hill overlooking a vast valley that once hosted approximately 400,000 emigrants as they moved toward the climax of their journey to the “promised land” of the Willamette Valley. (near Portland): 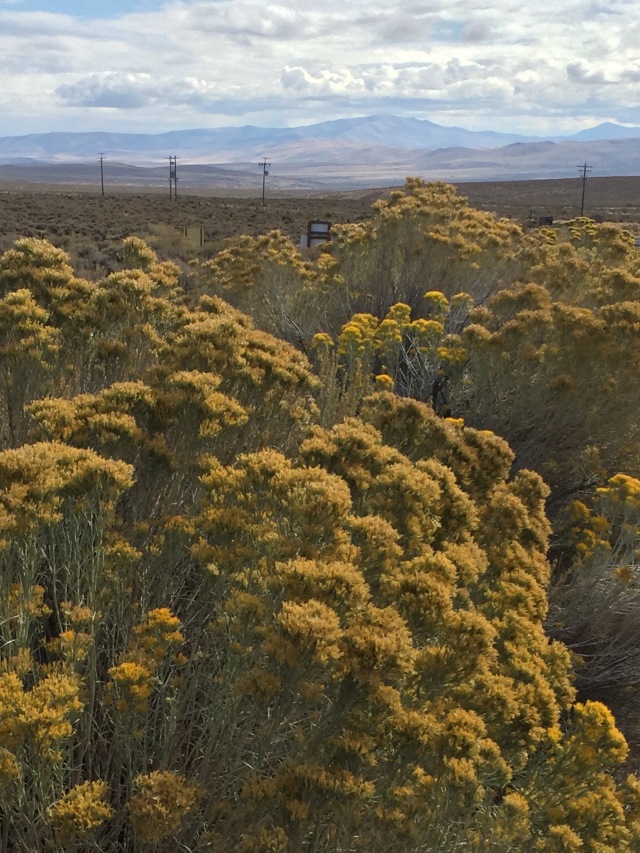 Starting in Independence, Missouri, emigrants took up the charge to go west because as journalists of the day put it — “it was our manifest destiny to extend US boarders from coast to coast.”  They eventually traveled 2,170 miles — initially their primary enemies weren’t Native Americans. Native people often helped by trading food, clothing, etc. for guns, pans, etc. However, by the 1850’s so many folks were flooding westward friction with Native Americans became inevitable — they were overwhelmed and outnumbered by all these travelers: 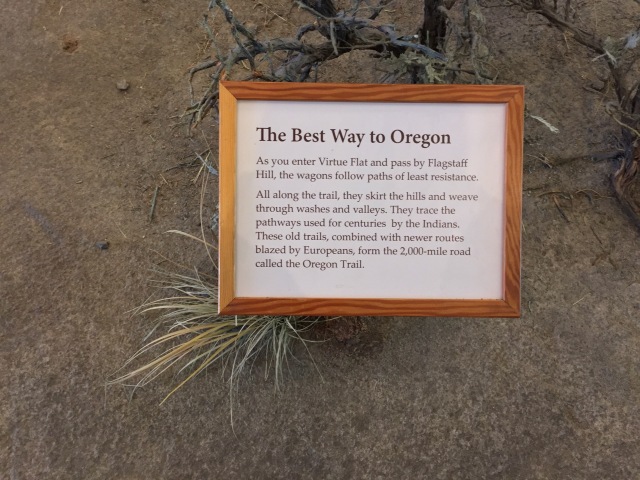 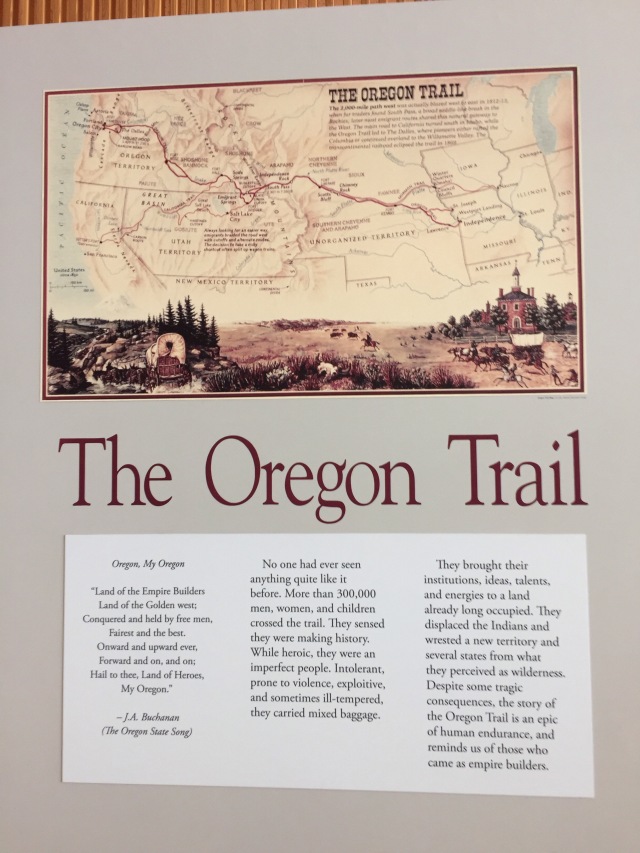 The trip was hard on any that ventured west–children and seniors (50 yrs.+) were not always appreciated or wanted — they took away resources from others.  Thousands died from hunger, disease (cholera and dysentery were common) and accidents with guns, livestock or wagons — it was truly about survival of the fittest.  Look at this photo — do you think they’re happy?: 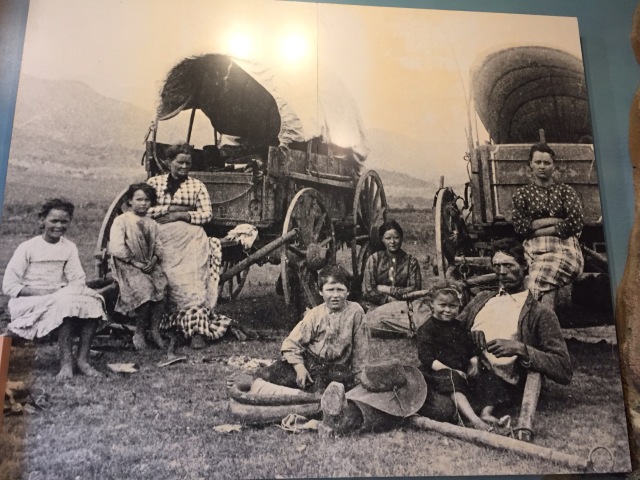 The following photos are of lifesize displays located in the Interpretative Center.  The artifacts are both authentic and replicas.  The animals in the exhibits were donated by local taxidermists. 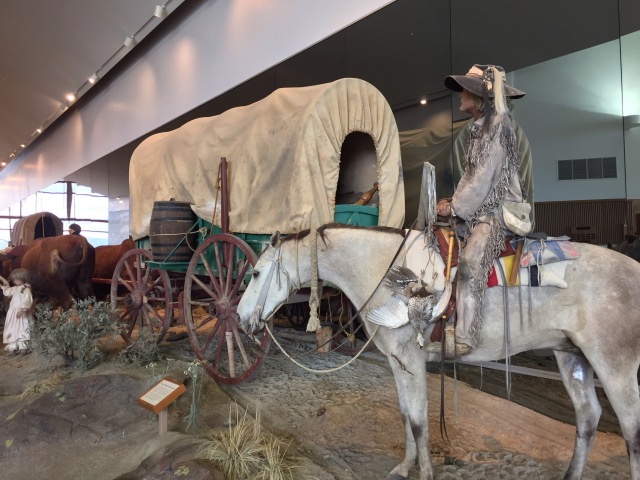 Most emigrants used wagons called prairie schooners — smaller versions of Conestogas to travel across land and water — wheels could be removed and reattached as needed: 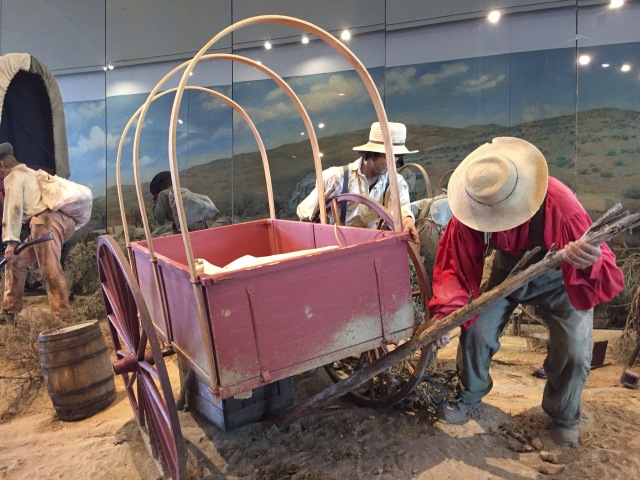 Remember the television program called “Wagon Train” staring movie actor Ward Bond (You-Tube it).  Each week Bond led a wagon train west.  At some point on virtually every show the wagons would be pulled into a circle — usually to battle Native Americans.  The fact is this was a routine practice used for general protection of livestock and emigrants — only occasionally implemented to battle enemies: 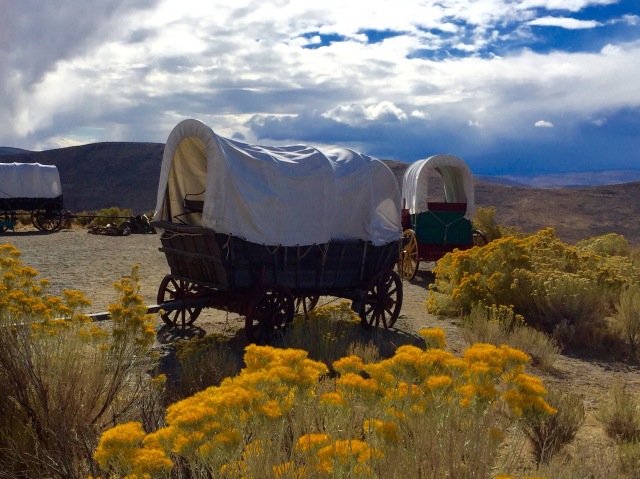 The size of the wagons didn’t encourage passengers since each had to carry 6 months of provisions person;  and niceties like furniture, dishes and the like.  The only passengers would be the infirm and younger children — most people actually walked (some without shoes) the entire distance: 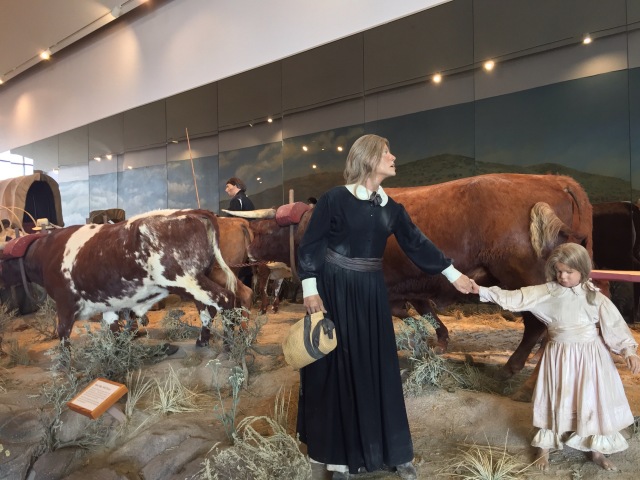 It was a arduous journey — many died and were buried along the trail.  Some like the infamous “Donner Party” rued the day they left Independence.  Others like Joseph Smith choose not to go to Orego and instead settled in what is now Utah.  His followers would be called “Mormans”.

It sure took a lot of gumption to make this long journey — some might even say craziness.   Whatever the rationale: getting a fresh start, finding adventure, avoiding the financial crises of the time or grasping Manifest Destiny like a true believer these emigrants were a sturdy lot.

American history is replete with efforts like those presented in this Interpretive Center.  We Americans are all emigrants and immigrants — that’s something to chew on — especially this year.

1 Response to Not a Child’s Game