So you say who is that? Well, take a guess.
Still not sure? How about now:

He was a lieutenant in the Pacific in WWII:

It was my good fortune that just a few days ago the Library re-opened after a multi-million dollar facelift that revitalized the “museum” with updated exhibits using the latest in interactive technology. The National Archives has assumed control displacing the original crew of Nixon cronies (some might call apologists). They have done a wonderful job — this is my tenth visit to a presidential library. Each has as unique as the man it represents.
Like it or not Nixon has been an influence in all of our lives since 1952. That year Ike won the presidency with Nixon as his VP — until 1960 — his staunch anti-Communist positions while in Congress greased the skids to the VP. But it was the Checkers scandal (his first in 1952) that could have ended his campaign before it began. Instead he gave a pleaful televised address to implore the country to believe he did nothing wrong–Checkers was the name of a dog given to him as a gift after the speech:

He successfully “beat the rap” and became VP: 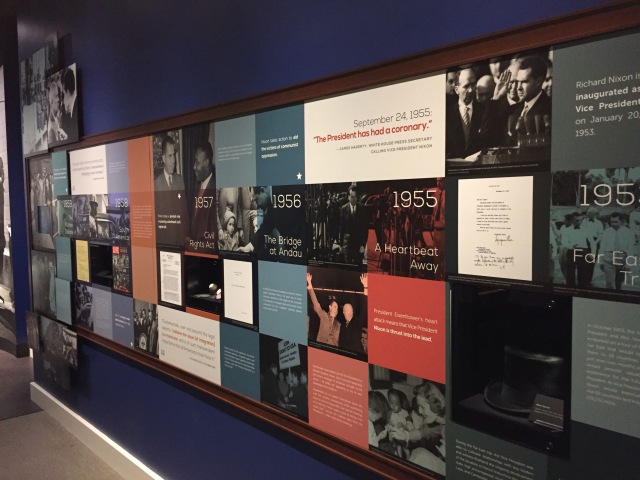 While VP he participated in the “kitchen debate” with Nikita Krushchev the Premier of the Soviet Union (1959):

Surely you know this — in 1960 he ran for president losing to Kennedy–in a very close election –so close he could have contested the results. But he didn’t contest it for the good of the country –sound familiar? 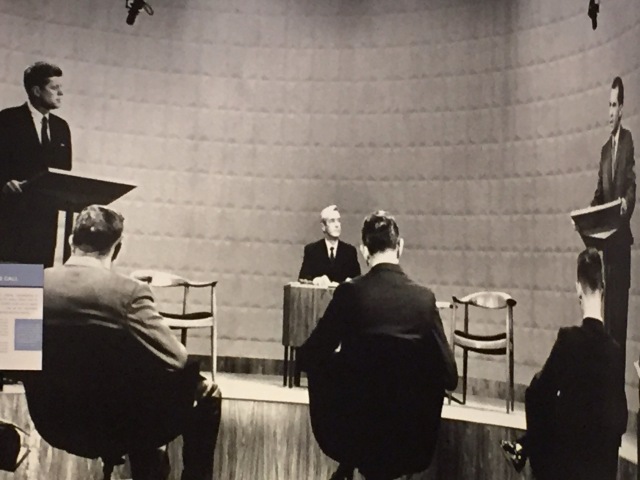 From 1960 to 1968 Nixon “wandered in the wilderness”.   He lost he election for California governor in 1962. For the next six years he spent time with family, his law practice and making speeches here and abroad (sound familiar):

Nixon was a dog nut. Well, ok I knew about Checkers — his cocker spaniel. But I didn’t know about the Irish Setter, the miniature poodle and a Yorkshire terrier — all going to the White House in 1968:

Why are all presidents such fans of dogs??

Nixon was one smart cookie — he could have matriculated to Harvard on a full ride, but his family was so poor he couldn’t afford to travel east much less live there. He stayed home working in the family store and attending Whittier College — later attending Duke for law school. He met Thelma “Pat” Ryan (his future wife) while they both acted in a play at the college -really! And both were of Irish and Quaker descent:

Every one knows he ran for and won the presidency in 1968 running as a law and order candidate — oh, and he said he had a secret plan to end the Vietnam War. Well, he eventually defeated Hubert Humphrey and George Wallace — it’s was quite the campaign — plenty of election artifacts on view: 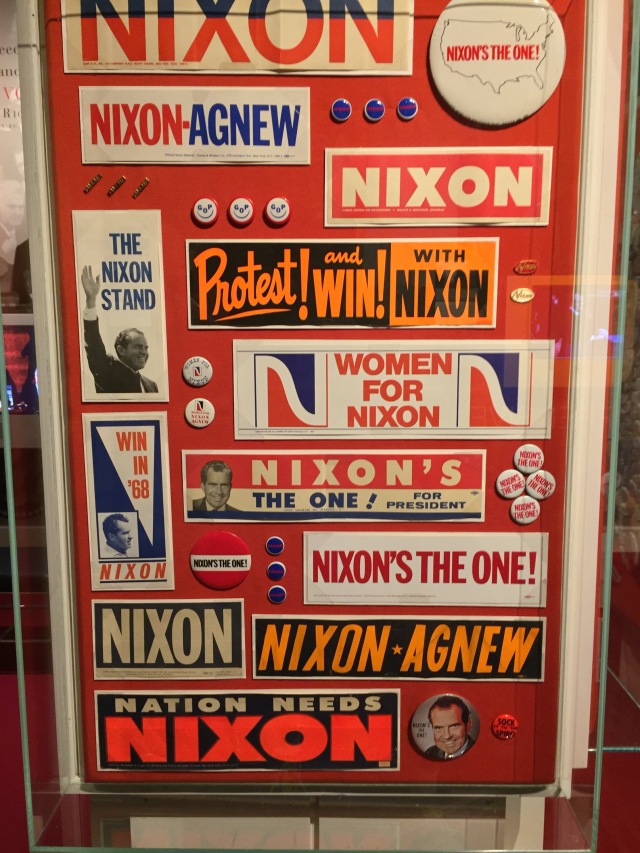 In 1968, Nixon figured out how to use television after losing to Kennedy because of TV — he appeared on a topical comedy program called Laugh-in — using self-deprecating humor (Nixon looked into the camera and said, “Sock it to me!”) to make himself look more human — something all candidates do today: 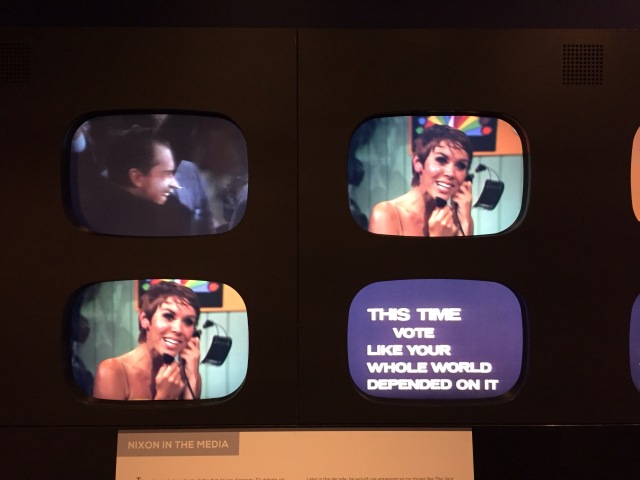 The year 1968 was one of turmoil, confrontation, anger and mean streets — a political climate far worse than today’s — the country seemed split:

still, the statement Nixon made at his inauguration below rings true today:

The anti-war movement was not pleased by his election or his “secret plan”: 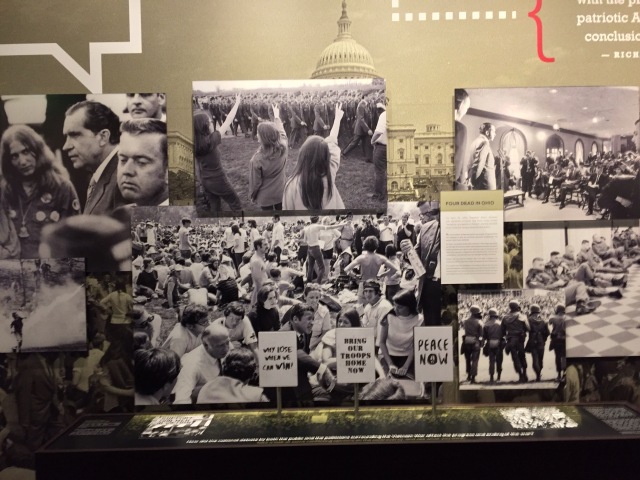 Soon into his first term Nixon expanded the war in Vietnam to other nations —bombing Cambodia and Laos — eventually bringing the Vietnam War to a stunning end in 1972: 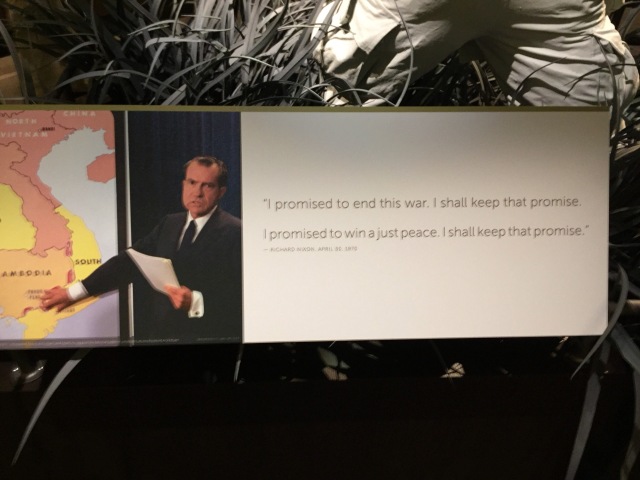 Yes, Nixon did end the war and he concurrently ended the draft (literally days before I was due to be drafted) and replaced the draft with the all-volunteer armed forces we have today. Depending on my mood I vacillate on the value of this idea.
The remainder of Nixon’s first term was filled with some heady stuff that has had repercussions to today: he signed Article IX into law (women got equal protection and rights under the law); Nixon started the EPA (signed he Clean Air Act); supported the lowering of the voting age to 18; signed legislation to protect pensions; increased arts funding; opened the door to China — this was huge—see the handshake — it had been 25-years since an American official and a Chinese official had shook hands:

At the time it was referred to as ping-pong diplomacy:

and Nixon successfully initiated negotiations for nuclear disarmament with the Soviet Union — below Nixon is with Leonid Brezhnev, the Leader of the Soviet Union at the western White House in San Clemente,CA:

So f you haven’t figured it out yet Nixon was really on an impressive roll — how could he possibly lose to McGovern in 1972? Well, frankly he couldn’t. McGovern was an extreme, but good-hearted lefty — first one since as anyone running for president since Henry Wallace in 1944:

Nixon knew he would overwhelm McGovern. Heck, it was 49 states to one:

This brings us to Watergate. Knowing everything we know — and that Nixon knew — why Watergate? Why indeed?   Perhaps it caused in part by the release of the Pentagon Papers by Dan Ellsberg —  released the same day as the wedding of Nixon’s daughter Tricia: 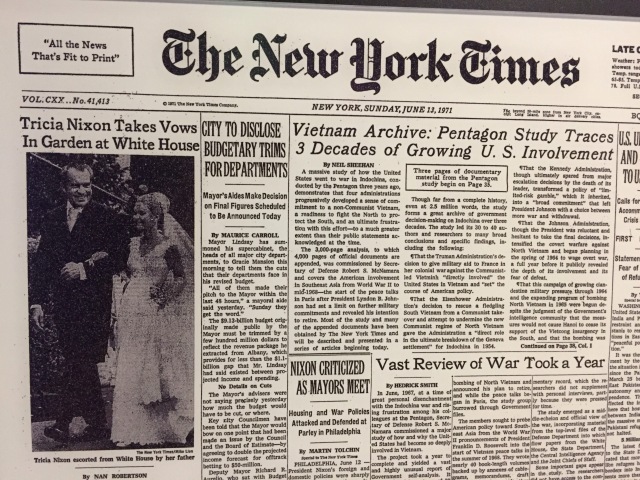 The Library’s exhibits delve deeply into the issue. One can listen to tapes, see the Watergate hearings, view exhibits and read reams of documents — here is a sampling: 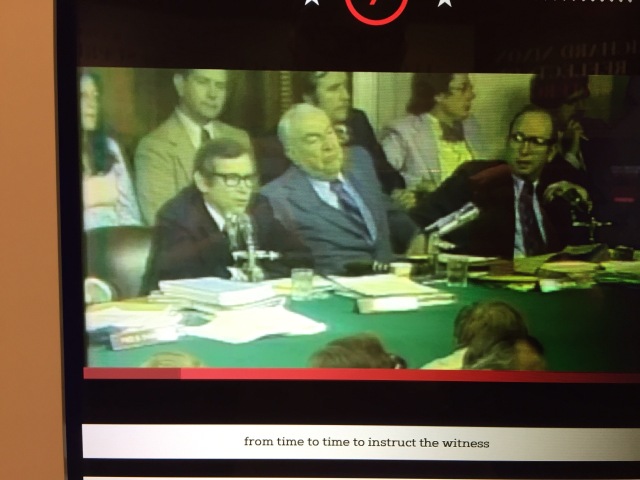 This the recorder used in the by Nixon in the White House: 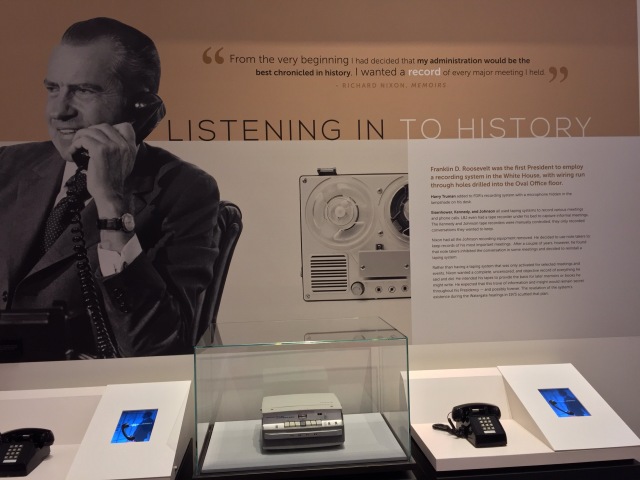 I think this summed about the country’s feelings at the time:

It got so based even Elvis couldn’t help: 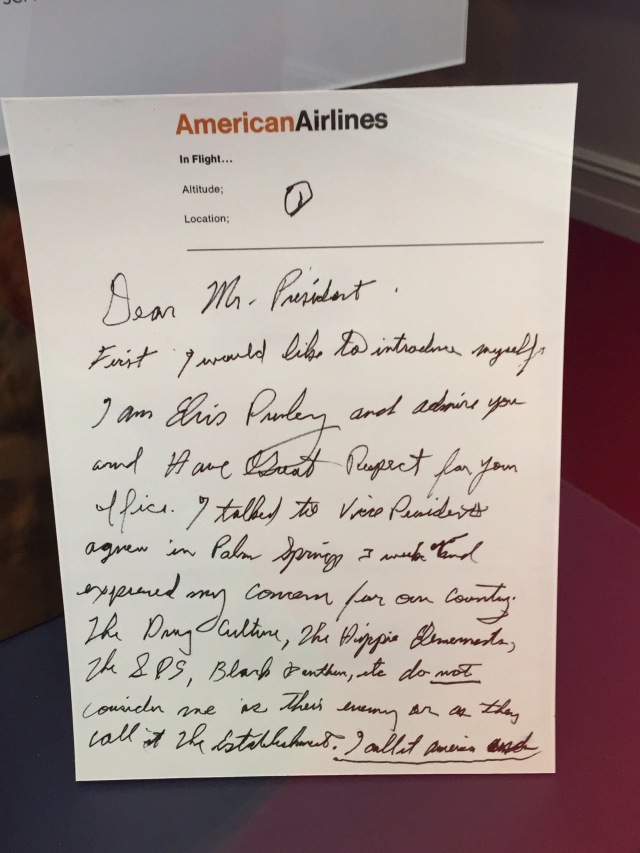 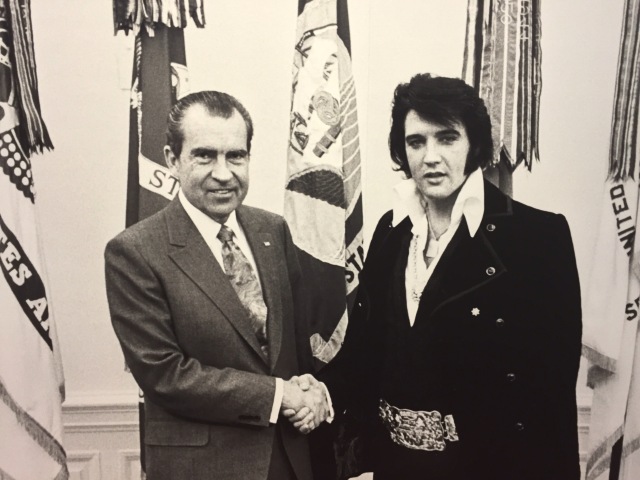 I spent considerable time listening to the tapes, viewing the interviews and reading the exhibits. I’m perplexed — was this corruption of the soul, the body politic or of the process? Could it be all three? The British historian Lord Acton once said, “Power tends to corrupt and absolute power corrupts absolutely”.  Is he right? This photo was taken during the Frost-Nixon interviews when Nixon was reflecting on his actions during Watergate: 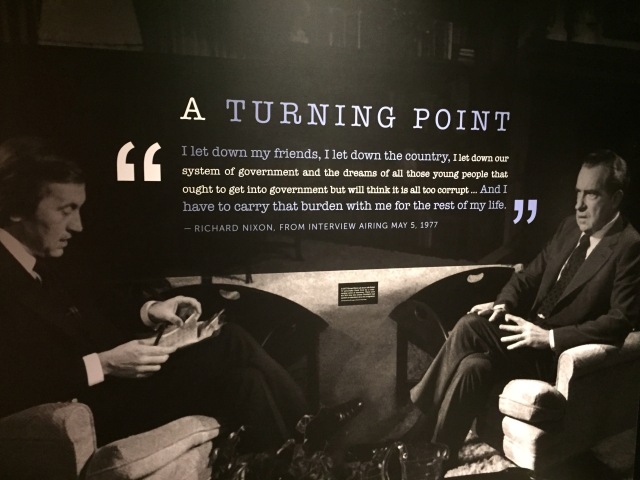 What happened to Nixon? Was it fear of success? Was it paranoia?  Or anger at his enemies?  Maybe it’s a combination of these and his own demons spawned in the depression –Nixon grew up extremely poor. One of five children he lost two siblings at a young age –the depression was very cruel.  His home was moved he library site:

Could these events cause Nixon to develop devices that he would later use to protect himself from the “evils” of the world?

Nixon himself seemed uncertain even up to the David Frost interviews which as a whole provided insight into Nixon’s tortured soul. If it sounds as though I’m sympathetic I admit that as time passes I have a greater understanding of why someone might behave so irrationally.

However, that doesn’t mean I can forgive and forget. Nixon was a bright, complex person — an introvert in a profession made for and controlled by extroverts. Perhaps he never understood that what he’d accomplished prior to this disaster was historic and that his legacy (my goodness they all worry their damn legacy) could have been significant once he completed his second term.

As we all know Nixon would have been impeached. Instead he reluctantly resigns. Soon thereafter Gerald Ford his successor pardons him and the whole mess eventually recedes into history.  But its effects are long lasting. Today we have numerous laws regarding ethics, privacy, etc., on the books because of Watergate: 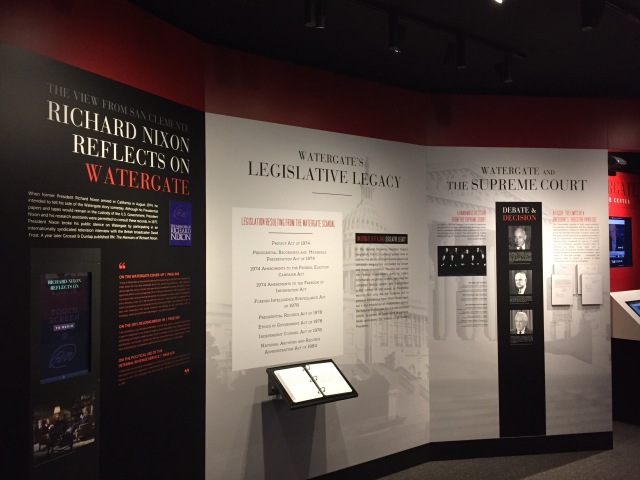 Many have equated Nixon to a Shakespearian character and maybe he is — so full of personal disappointments and tragedy. Is it really that simple?  One thing I do know is that each visit to a presidential library feels like a time warp that’s disrupting the certitude of my life as a traveler and observer of life.

Today Nixon and Pat lie near his library:

You don’t have to be a student of history to appreciate the Nixon Library.