I Fibbed — So Shoot Me

I’m lying on my bed celebrating the end of my Camino by eating a chocolate bar — love a first bite for me:

As I finished it–yup ate the whole thing: 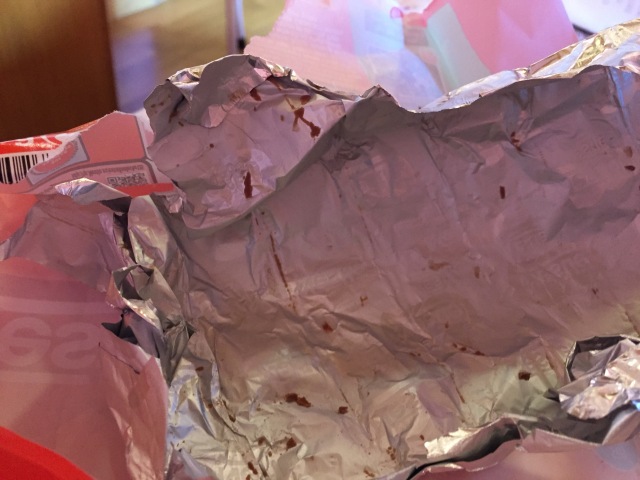 I knew I had to tell you about attending the Catedral of Santiago today.

Of course, this breaks an implied promise that I’d made awhile ago, not to show anymore religious art or churches.  Well, guess what — I fibbed.

One day after entering Santiago I attended a daily Santiago ritual — the pilgrim mass.  The Catedral is undergoing restoration work at present–still it’s a handsome sight:

Not as “glamourous as the Catedrals of Burgos and León it was airier than that of darker Pamplona Catedral:

Inside are some interesting sights:

The porcelain-like statues of angels and saints–this photo shows angels attached to the pipes of the organ:

The altar enjoys the same treatment:

I felt compelled to join all of my fellow peregrinos and a multitude of tourists for this daily event.  It was quite the spectacle for Catholics, non-catholics and unbelievers.

The rituals have existed for a long time.  Nuns singing, a multitude of priests speaking a variety of languages.  The building can hold a thousand or so–most stand for the service.  I must say the pageantry did not disappoint:

The march of clergy entering the sacristy:

Then the piece de resistance:

The swinging giant incense burner–around since the Middle Ages — at one time the incense likely dispelled the smell of pilgrims and perhaps was a means to control disease too.  Today it’s a ritual that generates a throng of cameras–it took 6 men to swing the burner: 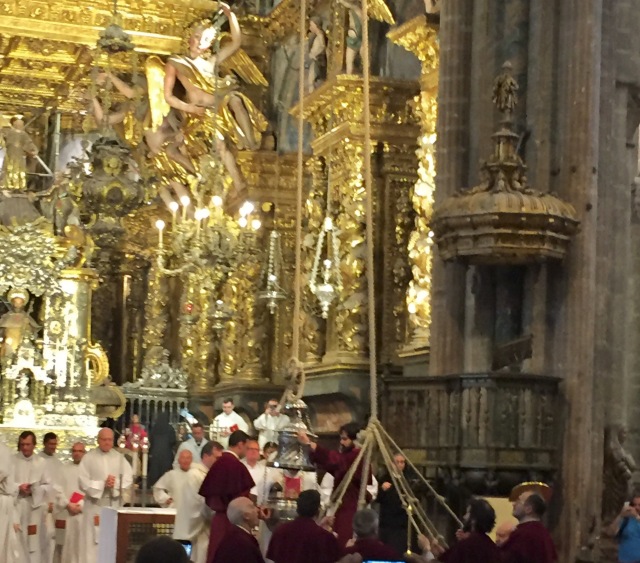 The burner is on a think rope that was pulled into a very high arc causing it to sail well above the attendees — a most impressive sight: 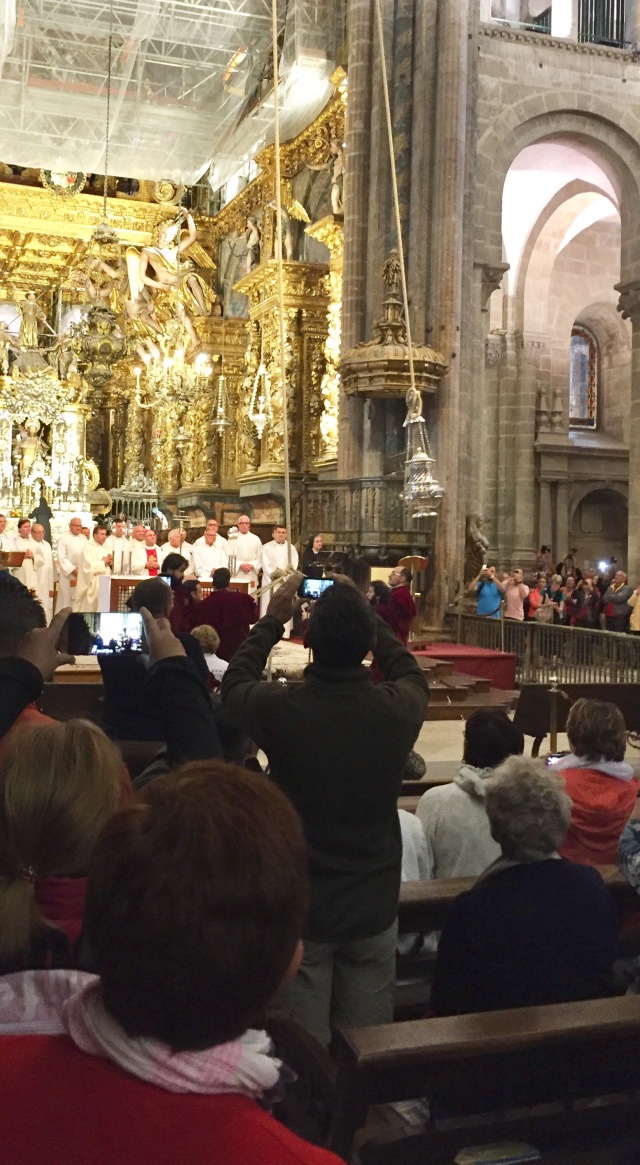 The incense burner is stationary by the of the service. 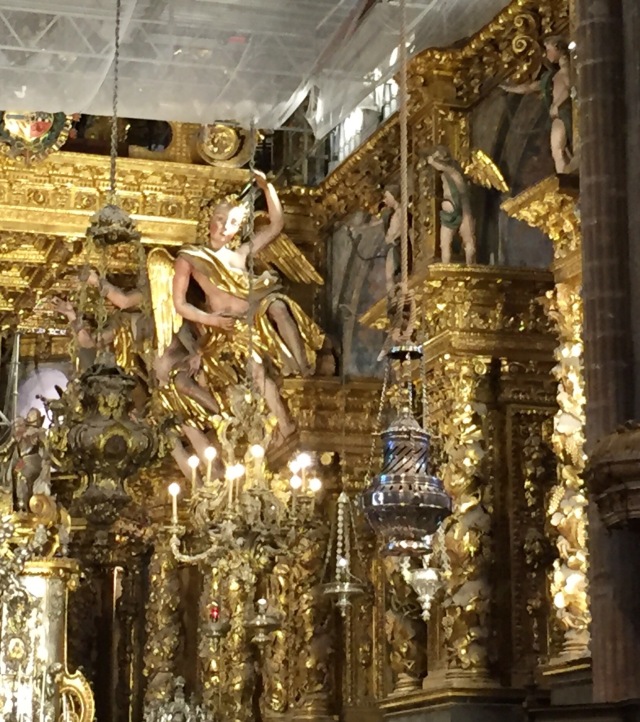 As a “fallen or wayward” catholic I felt a certain impulse to join in with the rituals.  This feeling was short-lived–but damn those folks sure know how to put on a good show!

The Catedral does contain some interesting works:

For example–a twin bust of Popes John and Benedict:

The confessionals are rather unique as well — nice side view with the lamb –this was closed for business:

You can tell by the unlit red light: 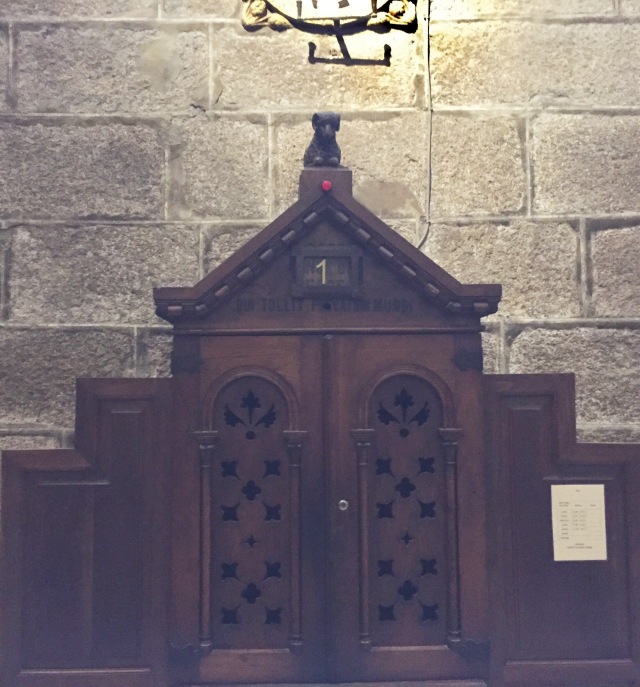 This one was open and busy–see the light is on; 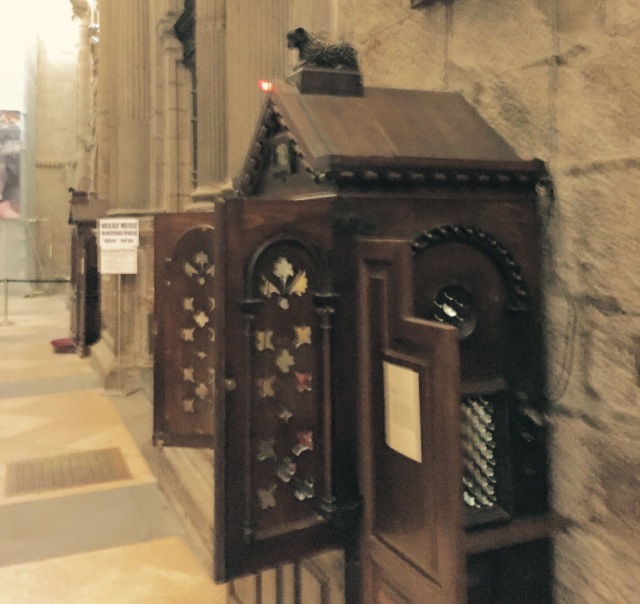 I found this sealed door interesting.  It is opened only during Holy Years as announced by the pope.  Tour guides were heard to say people line up for hours to walk through–2021 is your next opportunity:

Once mass ended a long line developed rapidly to “hug” a statue of St James (Santiago). This stands behind the altar.  Again, pilgrims are typically expected to complete this act and then pay respects to the crypt holding St James remains in a silver coffin:

No photos are allowed of the statue or the act of touching it–suffice it to say I did hug him.  Again, getting caught up in ritual.

I did take a photo of the entrance to the crypt:

Shortly thereafter I headed to the official “pilgrim office” to obtain a certificado of my journey.  To obtain this one must have a pilgrim passport stamped along the way–twice a day for the final 100km walked:

This is my stamped passport: 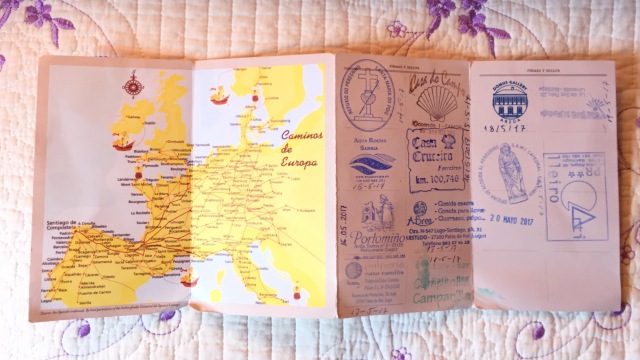 This is my certificado is in Latin — even my name–to get one free one must have done “The Way” for religious or spiritual reasons:

Surprisingly, the journey did become spiritual.

8 Responses to I Fibbed — So Shoot Me